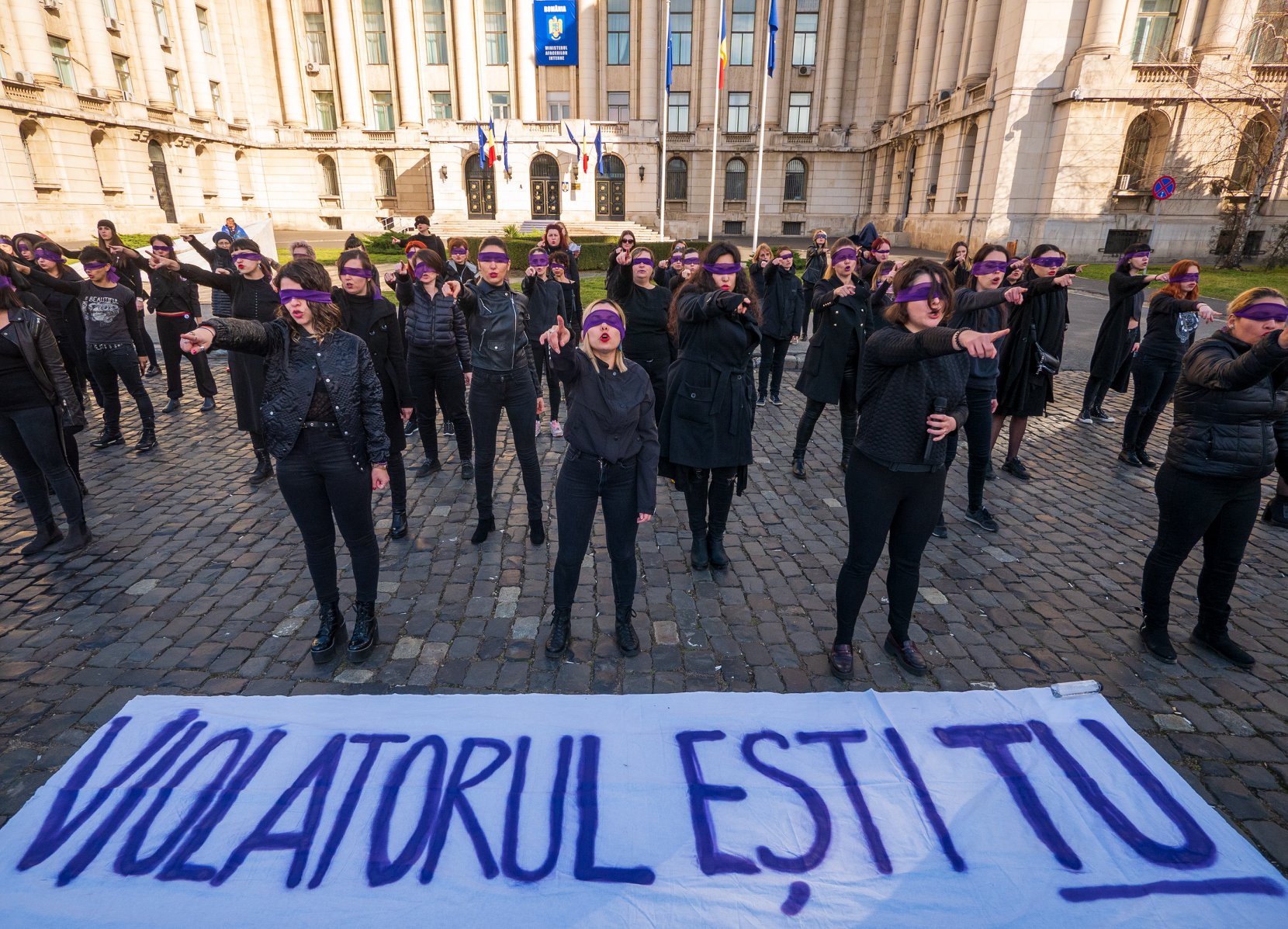 Not much has changed since July 2019, although we had expected the authorities to react quickly in the aftermath of the Caracal case. 2020 began with the scandal of the National Liberal Party (PNL) mayor who raped two trafficked minors. One of the girls attempted suicide because of the trauma. Nothing happened to the mayor, and politicians did not publicly take a stance against the violence to which girls and women are subjected to in this country. How much longer are we going to hide and overlook this painful reality that women are forced to live in day by day?

Violence against women is still silently or explicitly accepted, both institutionally and within society at large. Statistics for Romania show that one out of four murders take place within the family, around half of the citizens believe that rape can be justified in certain circumstances, and 30% of women say that they were victims of physical or sexual violence at some point in their lives, after the age of 15. Around 81% of cases of violence occur at home - both in rural areas (53%) and within cities (47%). Also, in 81% of the cases, violence victims are women, and in 92% of the cases the aggressors are men. One out of four women in Romania was physically or sexually assaulted by their partner. However, only 4% of sexual violence acts end up in court. In addition, Romania is one of the main countries of origin of victims of human trafficking in Europe, often with the complicity of the authorities.

In solidarity with our sisters around the world, we have organized the flashmob "The rapist is YOU" in Romania, to show, once again, that sexism and violence against women are normalized in all patriarchal societies, from East to West, and are NOT a sign of Romanian exceptionalism, "uncivilization" or “backwardness”. The flashmob was also performed in both Romanian and Romani languages, to draw attention to the fact that Roma women in Romania face sexism and racism from authorities and society, and are doubly affected by this racist-misogynistic systemic violence.

We came together as a feminist collective and created the #CadeUnaCademToate (#IfOneFallsWeAllFall) movement, in solidarity with the wider intersectional feminist movement - #NiUnaMenos, and with other similar initiatives in Europe, Latin America, the US and beyond, fighting for women's rights, regardless of color, nationality or sexual orientation.

Our feminism is intersectional. Often, the most vulnerable among us, exposed to multiple violence by state institutions and public discourse, are women with intersecting identities: Roma women, poor women, lesbian women, transgender women, sex workers, migrant women, women living with disabilities, neurodiversity or mental health conditions and so on. We stand together in solidarity and we don’t leave any sisters behind. If one falls, we all fall!

The flashmob "Un violador en tu camino" was started by the feminist collective Las Tesis in Chile in November 2019, in protest against sexual and gender-based violence, and has spread to many other countries in Latin America and around the world.

In March, the women’s month, we want respect, equality, justice, safety and zero-tolerance for any form of aggression!

✊ Compulsory training on gender violence for police officers, legal and medical personnel. Most of the time, representatives of these institutions are misogynist, racist, homophobic, transphobic and are not properly equipped to respond to the needs of victims.

✊ Simplified institutional procedures to report rape and sexual assault, that respect women and do not force them to relive their trauma.

✊ The simplification of the forensic certificate issuance process for rape, domestic violence and other forms of violence.

✊ More 24-hour shelters for people experiencing domestic and sexual violence throughout the country, with capacity reflecting the real figure of women who need help, regardless of their documentation status.

✊ The depenalization and decriminalization of sex work. Sex work is work! Sex workers are constantly abused by police and blamed by society.

✊ Monitoring for persons convicted of acts against life, liberty and sexual integrity.

✊ Simplified procedures to file complaints against police officers who abuse or ignore victims.

✊ Subsidized public transportation and housing services at the national level. Safe public transport is a basic need for girls and women. Access to housing helps women get out of violent situations more easily.

✊ Classes on reproductive health and gender equality in schools. We need to unlearn how to live in a sexist society!