The Romanian Network for the Prevention and Combating of Violence against Women (VIF Network) organizes on Sunday, October 25, starting with 15:00, a public action to raise awareness on violence and to protest against violence against women. 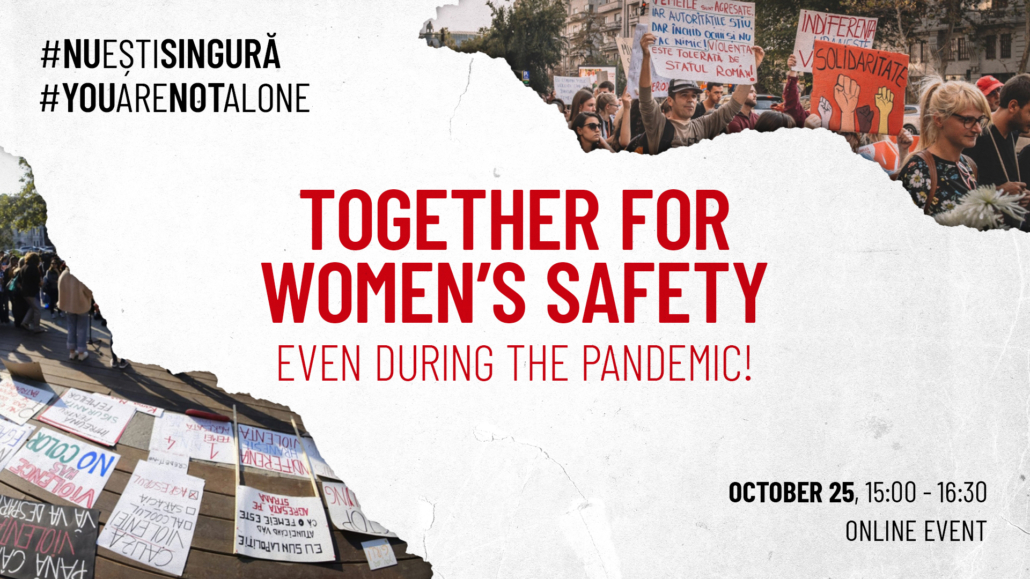 We will broadcast live on FILIA Center and Feminism Romania Facebook pages, from University Square - Colțea Park Bucharest, where a group of women’s rights activists will gather to speak out against violence and for the safety of girls and women regardless of ethnicity, race, gender identity.

Colleagues from various parts of the country will join online – from the SPICC Association in Timișoara, the Eastern European Institute of Reproductive Health in Târgu Mureș, A.L.E.G Sibiu and Artemis from Cluj.

This year, the March “Together for women’s safety!” organized in Bucharest by the VIF Network would have reached its 6th edition. Although it prevents us from being together physically, the COVID pandemic shows us the necessity to remain united against violence and to send a strong message of awareness and condemnation of gender violence.

The pandemic amplifies and aggravates cases of violence against girls and women. The lack of specialized services and the poor organization of state institutions is felt all the more acutely during the crisis we are going through.

We want respect, safety and non-discriminatory treatment for girls and women during the pandemic, given that the current health crisis exacerbates existing problems and causes new ones.

Isolation at home forced some women to live permanently in the same house with the aggressor.

The pandemic has intensified verbal, mental, physical and sexual violence. It showed us, again, how central and local authorities ignore the inequalities that girls and women face: sexism, racism, classism and transphobia.

Anxiety, insecurity, frustration – these are emotions that many people have felt since the beginning of the pandemic. The risk of losing a job, working from home, reduced incomes, economic difficulties, reduced mobility in Europe for a job, hatred of ethnic and / or vulnerable groups have exacerbated existing problems. The COVID-19 pandemic has caused mental health problems and lifestyle changes. There has been an increase in stress about children’s schooling and the health of the elderly. It made the burden of domestic, emotional and caring work even heavier, which pressed disproportionately on women’s shoulders anyway. It intensified violence against women, racism against Roma people and hatred of poor people. It has hampered access to abortion in state hospitals, with dramatic consequences for women’s reproductive health.

Data available for 2020 shows the seriousness of the problem:

When girls and women have the courage and report violence to the police, help does not always come. Or comes late - which can be fatal.

In February 2020, a woman from Ilfov was stabbed to death by her husband, against whom she had a protection order, issued a month and a half before the murder.

In Vişeu de Sus, Maramureș, an 18-year-old girl was killed by the man with whom she had a relationship since she was 13 and had two children. The killer was 6 years older than her. Bianca Țicală had previously filed a criminal complaint against the man, which did not help her to be protected by the police.

In Mehedinți, a 17-year-old girl was burned on 90% of her body by a man against whom she had filed a complaint for rape and sexual assault. The man was recently released from prison after killing 5 people.

In all these cases and many others, the authorities have failed miserably in protecting women.

But together we resist and we fight back!

Violence is not excusable! No girl, no woman deserves to be beaten or raped, harassed or offended.

OUR DEMANDS TO THE AUTHORITIES:

1. Adapting women's assistance and counseling services to the difficulties and risks caused by the pandemic;

2. Financing from local budgets of social, public and non-governmental services, necessary for survivors of violence;

3. Priority for the financing of emergency shelters;

4. Adoption of legislation on the implementation of a system for supervising aggressors using electronic bracelets.

5. Introduction of the obligation of DNA testing in cases of rape / sexual violence.

6. Identification and priority judging of cases of sexual intercourse with minors;

7. Collaboration with medical staff where there are suspicions regarding the cases / situations in which adolescent mothers (under 16 years old) became pregnant.

8. Informing the responsible state institutions ex officio and investigating quickly whenever they find out that there are cases of sexual acts with minors.

9. Ongoing training of staff in IGPR, IML, health services, social services and magistrates working with cases of women victims or survivors of domestic and sexual violence. Inclusion in all types of training of information about ethnicity / race / social status / sexual orientation.

11. Development of procedures for the intervention of the authorities where there are suspicions of practices associated with forced marriages between minors or between a minor and an adult.

12. Education, counseling and therapy programs for aggressors in each county;

13. Specialized centers for cases of sexual violence, with specialized staff to act in the interests of victims, through psychological counseling and legal counseling. Where appropriate, we request facilitators for the Romani language.

14. Allocation of a larger number of psychologists and psychiatrists in penitentiaries for the expertise of detainees who are on parole.

15. Improving the probation service for monitoring detainees convicted of sexual violence after their release, while allocating funds for social integration programs for released detainees.

16. Collaboration between institutions whenever a case of domestic aggression, rape, sexual harassment, sexual exploitation is treated. The police, the judiciary and the medical system must be real support institutions for victims.

17. Ensuring public access to abortion and reproductive health services. The obligation of state medical institutions to provide these services free of charge and accessible to all women in each county.

19. Treatment by the police of violence against Roma women, LGBTQIA + and other minority groups as intersectional violence based on at least two criteria.

21. Implement legal means to stop broadcasting programs that degrade women, promote a culture of violence and turn violence into entertainment.