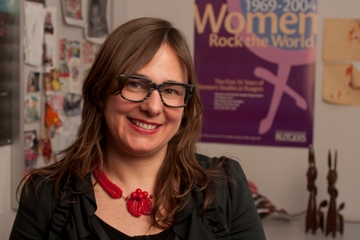 Ethel Brooks este invitată la București în cadrul unui atelier desfășurat în perioada 24-26 aprilie, la Muzeul Culturii Romilor: Drumul Săbăreni nr 101-125, București.
Iată descrierea și agenda evenimentului organizat de Nicoleta Bițu, Asociația ,,Romano ButiQ”.
Romani everyday life is marked by critical performance and performativity. Romani survival in Europe, over the course of a millennium, has been contingent upon the adoption and practice of a number of strategies, including oral history, storytelling, music, dance and theatre, as well as upon everyday narratives, that perform intelligible Romani identities for Roma and non-Roma alike. We draw inspiration from Stuart Hall’s contention, in 1989, that “…there is another position, one which locates itself inside a continuous struggle and politics around black representation but which then is able to open up a continuous critical discourse about themes, about the forms of representation, the subjects of representation, above all, the regimes of representation.”  Twenty-five years later, we are interested in working through Stuart Hall’s “other position” with regard to Romani performance, artistic production and politics; in a moment when Romani people are marginalized, excluded and subject to violence across Europe and beyond, how do we understand, theorize, articulate and practice a position that takes seriously the politics and struggle around, above all, regimes of representation?
Over the course of a two-day workshop marked by performance provocations, we will consider the openings for and potential of exchange, collaboration and critique across and among Romani communities in Europe, which are at once diverse and at the same time share cultural and community practices, languages and ways of being, as well as parallel histories of oppression, exploitation and marginalization. By sharing practice, critique and experience among performance scholars and practitioners, the workshop will begin a mapping and networking of the current claim-staking practices of performance, its critical stance and its multiple forms, with the hope of producing new possibilities in performance and politics alike.
Schedule
Friday, 24 April 2015
18:00 Opening remarks by Ethel Brooks and Jane Collins
Reception following the Introduction.
Saturday, 25 April 2015
10:30-13:00 History of the Project, the Kakka Collective, Discussion & Performance Provocations
13:00-15:30 Lunch Break
15:30-18:00 Current State of Performance and Activism in Romania
Sunday, 26 April 2015
10:00-13:00
Next Steps: Discussion, Planning and Possible Networks
Aims and Questions for the Workshop
The aim of this project is to establish a transnational network of scholars, performers, community activists, artists, writers and filmmakers in order to investigate the usage and potential of critical performance as a socially engaged practice within and between Romani communities. The questions this workshop and the potential network aims to address are: What is the relationship between Romani performance, Romani iterations of performativity and hegemonic knowledge production? What are the slippages amongst these practices? What is the potential in these slippages and iterations for different forms of agency, especially in light of the current violence confronting Romani subjects across Europe?
• Map recent developments in Romani performance practice with regard to Roma in Europe and the UK.
• Establish a common understanding of performance methodologies currently employed in Romani communities and for Romani communities.
• Analyse current Romani performance practices in relation to analogue and digital technologies and assess the potential of digital media and digitalised performance to extend Romani knowledge production and dissemination.
• Consider the use and potential of archives relating to Romani history that exist in UK and Europe with relation to performance practice and the visual arts.
• Examine the benefits and limitations of existing scholarly practice with regard to Romani performance.
• Look to the future place and practice of performance in multiple venues, including traditional arts institutions, Romani neighbourhoods and in diverse public spaces, acknowledging the particular challenges around the site specificity and target audience of each performance.
• Identify the performance, activist and scholarly agenda that will enable the network to formulate a bid to the EU and other funding bodies to support interventions that use performance as a strategy of resistance and as a means of recuperation and regeneration.
Inapoi in sus
0
0
0
s2sdefault
powered by social2s